Just like batsmen and bowlers, fielders should also have some extreme qualities, which would help the team to take the deserving win. A good catch requires hand-eye coordination, instinct and courage. Not all the fielders have these capabilities, but some lack a few. Catching a ball is one of the utmost important qualities of the fielder, which might help the team to take the most important wicket. Taking the important wicket helps them to reduce scoring runs. Let’s talk about some of the important ways, which would help you in improving your catching skills in cricket.

VISUALISE THE SHOT IN YOUR MIND BEFOREHAND:

A fielder should practice in the visualisation of the shot, a bowler would bowl and in which way the batsman would hit in order for the ball to reach your side of the field. If you keep on visualising and practising in that way, you would have a logical calculation. In your head, if you had a plan, it would help the mind to get ready and your body will act accordingly. Keeping your toes and hands ready is as important as picturing the shot.

One should put in more effort to practice fielding, as well. The more time you spend practising on the field, you become good at fielding on the ground. Get involved in catching drills such as high catch and low catch.

HOW TO PRACTICE HIGH CATCH:

Ask someone to throw a ball as high as in the air and you have to catch the ball and throw it as quickly as possible. In this way, you can improve your high-catching capability

HOW TO PRACTICE LOW CATCH:

There are two ways to practice low catch as follows:

Rebound nets are a net that is tightly wound around an adjustable metal frame. This would help the fielder to practice alone when there is no one to help with. You can throw the ball and it would bounce at different angles, which would help you to practice to take close catches.

HAVE SOMEONE HIT THE BALL OFF THE BAT:

If three or four players are looking forward to practising the catching skills, they can ask another player or coach to make a delivery of the ball and ask another player or coach to be an acting batsman. And the practising players should be in the slip position. Once the delivery is made and hit by the batsman, slip fielders should try and catch the ball. Practising this way helps the fielders to prepare for the field in a much better way.

STAND IN A BALANCED POSITION, BEFORE THE DELIVERY:

EYE ON THE BALL:

A fielder should always watch the ball. In order to be a successful catcher, you have to keep an eye on the ball from the delivery. Once it has been hit by the batsman, you have to use a hawk eye and calculate the speed and time, as it moves through the air. This would help you to stand at the best possible position to get the ball.

If the ball comes at the chest height of the fielder, then he should implement orthodox cup-catching method. In order to do so, the player has to keep both of his hands relatively close to his body, which would give him the grip he needs. He needs to keep in a position, where both of his pinkie fingers touch each other and the palms are facing upward and outward. As the ball comes near him, his hands should be relaxed and ready to be closed around the ball.

If the ball comes below the chest height of the fielder, then he should be ready with the reverse cup-catching method. In order to do so, the fielder should point his fingers up, with both the thumbs locked and the index fingers should be touching each other. The fielder should bend his knees in a slight manner, which would help them to take the catch at ease.

On the ground, there will be many situations where the fielder has to fly and catch the ball single-handed. So, one has to practice one hand catch off the field, during practice sessions.

POSITIVE UNDERNEATH THE HIGH BALL QUICKLY:

The fielder has to move fast and place themself underneath the high ball, as quickly as possible. By doing so, they can be in a balanced position, which gives them a grip to catch the ball at ease. It is impossible in some situations, but you could do this in the possible moments. By learning to be good with the speed of the ball, you will be well-versed in this.

USE SUNGLASSES AND A HAT:

During sunny days, a fielder could wear sunglasses and a hat, which would help them avoid dropping balls. As the sun comes at times, it would be necessary for you to have them with you on the field.

KEEP A CLEAR MINDSET BEFORE DELIVERY:

While fielding, you should not let your mind wander off here and there, which will cost you a missed catch and sometimes your dignity for not catching a ball. You should always clear your mind so that you can focus on the match. And you should get at least eight hours of sleep before the matchday. Rest and peace keep your mind clear and at ease.

When a fielder catches the ball near the boundary rope, there is a higher possibility that he might step onto the rope at the speed of catching the ball. Then it might be considered as a six, which would be a favour for the batsman. In order to avoid this kind of fuss, there is an option. If a player caught the ball near the rope, he can pass the ball to the nearby fielder, so he can complete the catch for him. This requires so much teamwork. The players should practice this type of catching drill during the practice, so they can implement it when such situations arose on the ground.

By using the above-said tips, the player can improve his fielding techniques to the next level and become an outstanding fielder. By practising well, a fielder can take match-winning catches. To learn about different types of bowling, visit here. 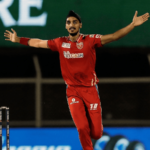 Who is Arshdeep Singh and why is he in the India squad?